Lisdey Ortiz is the proud wife of veteran professional boxer, Luis Ortiz -who will be facing the undefeated Deontay Wilder this Saturday night at the MGM Grand Garden.

Born in 1979, Ortiz began his career participating in international tournaments for Cuba -at the time he was known as “El Mercedez”
He started boxing at age 10 and by 12 was already going away to training camps on behalf of the Cuban national system. While Ortiz was a top amateur, going 343-19, he never succeeded at the top international level. Many say because — he was never given the opportunity to flourish on the biggest stages. 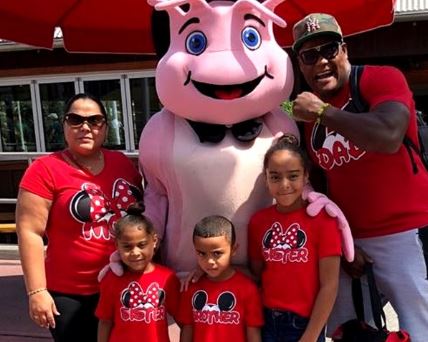 Ortiz defected to the United States in 2009 from his native Cuba, hoping for a career in professional boxing. Since his arrival he has bullied his way toward the top of the heavyweight division. Ortiz (31-1, 26 knockouts) combines refined technique with proficient punching power and secured 26 of his first 28 victories by knockout.

In addition, he hoped he could provide better care for his daughter, Lismercedes, who has epidermolysis bullosa — a rare and occasionally fatal condition that results in fragile skin and painful blisters comparable to third-degree burns. His daughter was diagnosed at three month’s old and is now 11-years-old.
He and wife Lisdey are the proud parents of three children. The couple’s daughter Lismercedes -receives treatments at Stanford University.

Lisdey Ortiz who is also a Cuban native was left behind to care for the couple’s children. She defected in 2012 and reunited with Ortiz at the American border. Two and a half years after living in the US, Ortiz was able to gain asylum for Lisdey Ortiz -at the time she was pregnant with his second child who is now 6 years old.

Mrs. Ortiz is quite private and not many more details are known about the spouse and mother of three.