Kenan Smith is the African American boyfriend of blonde bombshell and Alpine Ski racer, Lindsey Vonn. The couple has been dating for a while now and Kenan could be the one. Meet him below.

Before we gen into detail about the chocolate man, lets do a little recap on Vonn and see how much you really know about her.

The Minessota native was born Lindsey Caroline Vonn on October 18, 1984. The daughter of Linda Anne (née Krohn) and Alan Lee Kildow grew up to become a 5 ft 10 in badass Alpine Ski racer, dubbed the most successful female ski racer in the world.

Vonn has won four World Cup overall championships—one of only two female skiers to do so.

Lindsey who was on skis at age two –became the first American woman to win an Olympic gold medal in downhill skiing; she won at the 2010 Winter Olympics in Vancouver, as a member of the US Ski Team.

In addition to her 2010 Olympic downhill gold and super G bronze, she holds five World Championship medals, including double gold in 2009.

Vonn who has been successful also at managing her public image, played a major role in NBC’s Today Show coverage of the Sochi Olympics by hosting her own segments and providing analysis from the NYC studios. 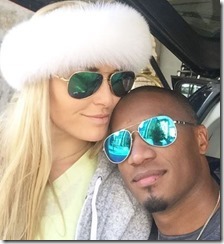 Being as popular as she is, her love life has also been of great interest. She married fellow skier Thomas Vonn in September of 2007. After the two divorced in 2013, she dated Tiger Woods for two years. In 2016, the Olympic gold medalist began dating Kenan Smith. 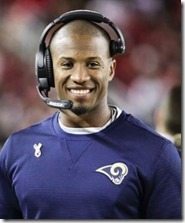 Kenan Smith is also into sports, the former football player turned coach –might not as a high profiled as his legendary skier girlfriend though.

Smith is a former football coach who until earlier this year, worked as an assistant coach with the Los Angeles Rams. According to TMZ he parted ways with the team on March 2017.

Kenan Smith was an offensive assistant coach with the team for a couple years until late last season, when he was promoted to tight end coach. He got axed following the firing of head coach, Jeff Fisher.

Before he turned to coaching, Kenan Smith –known as ‘Peanut’ was a two-sport star at Sac State from 1999-2003 where he was an all-conference wide receiver and a sprinter on the track team.

According to his college profile he is originally from San Jose, CA. Smith earned a degree in business administration from Sacramento State in 2005. He began his post-graduation career as a marketing intern in the athletic department at the University of Michigan.  He served as Assistant Director of Marketing &Promotions at Michigan from 2006 to 2009.

Prior to making it in the NFL, he worked as an assistant coach at Butler.

Vonn confirmed she and Kenan Smith were a couple last November, making the official announcement on Instagram.

You can find the football coach on Instagram here.