Mark Catlin is the devastated father of late Olympic cyclist, Kelly Catlin –who is said to have committed suicide last week.

Mark’s 23-year-old daughter took her own life on March 8th, reports say the gold medalist had suffered a concussion days prior to her suicide. Mark Catlin confirmed the tragic news to media in a letter. She was found dead in her on-campus residence.

His daughter was born November 3, 1995; the Saint Paul, Minnesota native was the youngest of a set of triplets. She attended high school in Arden Hills, just north of Minneapolis.

Catlin achieved fame and success after she snagged gold medals at the 2016, 2017, and 2018 UCI Track Cycling World Championships as part of the US team pursuit squads. She also won the silver medal in women’s team pursuit at the 2016 Olympic Games in Rio de Janeiro, Brazil.

In addition to being a USA Cycling national team member, Catlin was also a student at the University of Minnesota. She was working on a graduate degree in Computational and Mathematical Engineering at the time of her death. Catlin often described as multitalented, was also an accomplished violinist who enjoyed sculpting and drawing. 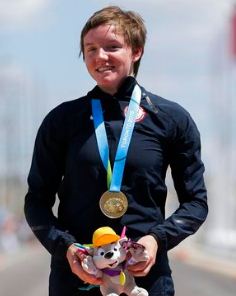 She is survived by her siblings, Christine and Colin and both her parents, Carolyn Emory and Mark Catlin.

Mark Catlin also found as Dr. Mark G. Catlin, is a pathologist in Saint Paul, MN. He has 40 years of experience. He received his medical degree from University of Minnesota Medical School; his specialties include Pathology, Cytopathology and Anatomic Pathology and Clinical Pathology. Kelly’s mother, Carolyn is originally from Kentucky, she attended Centre College and is currently living in Arden Hills, Minnesota.

Kelly’s brother, Colin holds a B.S. in Neuroscience from the University of Minnesota. Christine Catlin is currently based in Minneapolis.