Katrina Sloane is the stunning wife of NHL player, Brad Marchand -currently a left wing for the Boston Bruins.

Katrina’s NHL stud has done it again as the Bruins take on the St. Louis Blues in the Stanley Cup Finals. It is certain that Katrina will be in attendance to cheer him on. Her man was born Bradley Kevin Marchand in Hammonds Plains, Canada, to Kevin and Lynn Marchand. He has a brother and a sister.

He played his junior hockey in the Quebec Major Junior Hockey League and won two World Junior Championship gold medals as a member of the Canadian Junior team.

He was selected by the Bruins, 71st overall, at the 2006 NHL entry draft. The winger made his NHL debut in 2009 helping the Bruins win the Stanley Cup in 2011. That same year he earned the Bruins 7th Player Award.

Marchand has also represented his home country at the 2016 IIHF World Championship and at the 2016 World Cup of Hockey bringing home gold from each tournament. 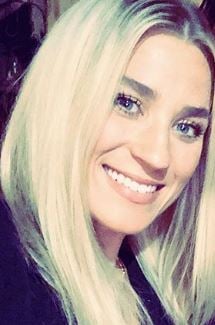 Brad and wife Katrina have been married for a few years now.

Katrina Sloane who now goes by Katrina Marchand is one consecrated NHL wag. She not only looks the part but she is also the mother of the couple’s adorable daughter, Sawyer. Following their nuptials in 2015, Katrina Sloane gave birth to their baby girl in 2017.

In addition, the Rhode Island native is also the mother to a son, Sloane from a previous relationship. Her son lives with her.

The blonde keeps busy between being the wife of a famous athlete and juggling two young kids. However, there was a time when she made a living on her own. She had a background as a real estate agent. It is believed she was active right up until her marriage to Marchand.

From her social media we can tell the mom of two has also showed an interest in home design. Her brother, Kevin, is a designer who creates one of a kind graphics on any kind of product.