Dayna O’Reilly is the stunning wife of NHL player, Ryan O’Reilly –a center for the St. Louis Blues.

Dayna’s husband was selected 33rd overall in the 2009 NHL Draft by the Colorado Avalanche. Ryan was born on February 7, 1991; the Canadian spent two years in the OHL playing for the Erie Otters before making his NHL debut. His older brother Cal O’Reilly also played in the NHL.

He had his breakout year with the Avalanche during the 2013-14 season, where he scored 28 goals and tallied 36 assists in 80 games.

He received the Lady Byng Memorial Trophy for exemplifying the best sportsmanship in the NHL in 2014. He was traded to the Buffalo Sabres in 2015. He was picked up by St. Louis this offseason from the Buffalo Sabres.

But O’Reilly had a big 2018, he tied the knot to his gorgeous longtime girlfriend, Dayna. The two had known each other at least since 2013. 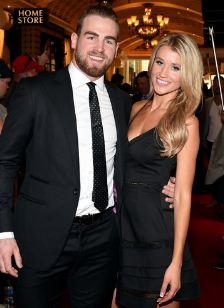 Dayna who now goes by Dayna O’Reilly –was born Dayna Douros, she has an equally gorgeous sister named Kyla. The blonde who also hails from Canada is based in Buffalo.

Prior to their 2018 nuptials, the couple welcomed their first child together. Dayna gave birth to baby boy, Jameson Keane O’Reilly, in late 2017. Their adorable son was present for their special day.

About the birth of his son, Ryan told Buffalo News

“You can’t explain it. It’s one of the most incredible feelings there is.”

When the NHL wag and mom of one isn’t busy caring for her boys, she does her own thing. Dayna is a yoga instructor. She obtained her certificate from the Samahdi Center for Yoga in Denver. Apparently Dayna and her hockey player stud do yoga sessions together; and you know what they say, a couple that yoga together stays together!