Bridget Cullen is the longtime wife of NHL star, Matt Cullen -until recently a professional ice hockey center for the Pittsburgh Penguins.

Bridget’s star athlete husband has recently announced he is retiring from the game after 21-seasons. In addition to the Penguins, Cullen he also played for the Florida Panthers, NY Rangers, Ottawa Senators, Minnesota Wild and the Nashville Predators.

Born Mathew David Cullen on born November 2, 1976; the Minnesota native attended at Moorhead High School and St. Cloud State University for a couple of years before he was drafted by the Mighty Ducks of Anaheim in the second round (35th overall) in the 1996 NHL Draft. He played in the WCHA and AHL before making his NHL debut with the Anaheim Mighty Ducks in 1997.

He then joined the Florida Panthers and the Carolina Hurricanes with whom he won the Stanley Cup in 2006, the season after that he joined the New York Rangers before returning to Carolina for the 2007-08 season.
Cullen signed a deal with the Senators in 2009 and then with the Minnesota Wild in 2010, in 2013 joined the Nashville Predators and signed a 1-year-deal with the Penguins in August, 2015. He won two more Stanley Cups with the Pittsburgh Penguins in 2016 and 2017.
The three-time Stanley Cup cham, has appeared in 1,516 NHL games – 19th most in NHL history.

Matt has been happily married to Bridget Cullen for years. 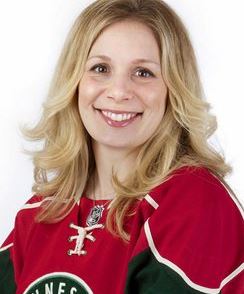 Bridget Cullen was born Bridget Deann Dilbeck in September, 1977. Her mother’s name is Renae Alma Setter; she grew up with three sisters, Nicole, Cassie and Melissa.

Bridget and Matt met at a chemistry class at Moorhead High School. During her time in high school Bridget was a star basketball player. The two dated for a while but split up following their graduation. They ended up going to different colleges. Bridget played basketball at Minnesota State-Mankato, while Matt played hockey at St. Cloud State.

The two rekindled their romance after they met again at a friend’s wedding. At the time Matt moved to Cali and she went to Illinois for college. She made the move to join him in California shortly after. The two tied the knot on June 10, 2004 in Clay County, MN.

Bridget who holds a master’s degree in nonprofit administration -is also the proud mother of the couple’s three children. She gave birth to their first child Brooks in 2007, three years later son Wyatt came, and a year after that the youngest Joey was born.
The NHL wag and mom of three keeps busy wiht the couple’s foundation. She and her husband founded the cahrity Cullen Children’s Foundation in 2003. The foundation, also called Cully’s Kids, was created to raise support for children’s health care needs in their fight with cancer.
Along with the nonprofit work, Bridget considers faith very important. The blonde is also involved in several Bible studies.
The family of five resides in Minnesota.