Andrea Bishop is the gorgeous wife of NHL player, Ben Bishop –a goaltender currently playing for the Dallas Stars.

Andrea’s hubby is known as ‘Big Ben’ who previously played for the St. Louis Blues, Ottawa Senators, Tampa Bay Lightning and Los Angeles Kings. In 2017 he signed a six-year contract worth about $29.5 million with the Dallas Stars.

Born November 21, 1986; Ben grew up in Des Peres, Missouri and played youth hockey for the Kirkwood Stars in St. Louis. His parents are Ben and Cindy Bishop. His grandfather was a professional tennis player.

Ben played college hockey at Maine and was drafted by the St. Louis Blues in the third round of the 2005 NHL Entry Draft, 85th overall, and became one of their top prospects. 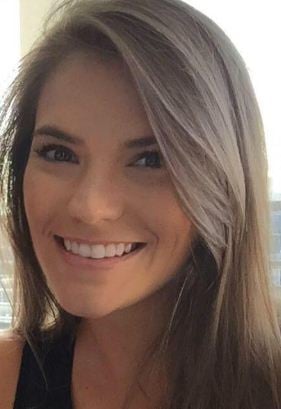 He began dating Andrea Talmadge in 2015. The couple tied the knot in 2017 at the Vinoy Renaissance in St. Petersburg Resort & Golf Club. Her man happens to be one of the tallest goaltenders to ever play in the NHL. Ben Bishop is 6 ft 7.

The brunette stunner graduated from Stetson University and is a proud NHL Wag who goes by Andrea Bishop.

She was born Andrea Talmadge in Tampa, Florida. She is the daughter of David and Kathy Lynne Talmadge and was raised along two older sisters, Justine and Kristyn. Both of her sisters are also married.

Andrea Bishop and her hubby are very private, though her man is an NHL star who makes millions, they are both pretty low key.

Not much more is known about Andrea and is not clear how the couple met. The two aren’t big fans of social media either so is not clear if by now they have a couple of children or not. Is also not clear what Andrea does for a living.