Anastasia Zinov’eva is the stunning wife of NHL star, Evgeny Kuznetsov -currently a forward with the Washington Capitals.

Anastasia’s NHL stud is currently under investigation after footage of him allegedly doing lines of white powder -believed to be cocaine -surfaced on social media. The 27-year-old who appears to be at a hotel room is seen talking on the phone, sitting beside a table with two lines of what seems to be a powdery substance and a rolled dollar bill. The video has been deleted and Evgeny has since denied the use of illicit drugs.

Evgeny is known as a skilled forward with exceptional skating and creativity, he made his NHL debut in 2014 with the Washington Capitals. He helped the Capitals win the 2018 Stanley Cup Championship.

Born Yevgeny Yevgenyevich Kuznetsov on May 19, 1992 in Chelyabinsk, Russia -he played two seasons for the Traktor-2 Chelyabinsk in RUS-3 and won a gold medal representing Russia at the 2012 Ice Hockey World Championships. 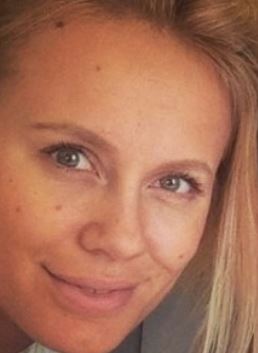 In the alleged video, a woman can also be seen on the background. It is believed is his wife of 8-years, Anastasia Zinov’eva.

The two tied the knot in 2011 in a small ceremony held at his team’s (Traktor) arena. According to RMNB, he and Zinov’eva dated for less than a year before marriage. As an interesting fact, after her hubby signed an entry-level contract with Washington in 2014, the couple lived with fellow Russian Alex Ovechkin as they made the move to the US.

Anastasia Zinov’eva who is also known as Nastya is the mother of the couple’s child. She gave birth to a baby girl in 2015, the couple named her Ecenia.

Not much more is known about the blonde NHL wag, it seems she enjoys keeping a low profile and spends most of her time caring for the couple’s young daughter.