You are here: Home / NFL / Who is Ryan Izzo’s Girlfriend?

Ryan Izzo, the NFL player you probably know as the tight end currently a member of the New England Patriots is currently single?

Born December 21, 1995; the New Jersey native who played college football at Florida State was selected by New England in the seventh round, No. 250 overall.

You probably already know all about Izzo’s football stuff, but what about his personal side?
The 24-year-old most likely has been in romantic relationships before but he seems to keep quiet about the details.

Though it may appear as if he is single, with professional athletes you never know. He may be in the early stages of a new relationship, who knows. So instead, let’s focus on some of the facts that make him quite the catch for any lucky lady out there.

1. Izzo is the main attraction at tight end for the New England Patriots

The 2018 seventh-round draft pick, spent his entire rookie year on injured reserve. He was then exiled to the inactive list after six uninspiring appearances last season. Fast forward to present times, Izzo has been on the field for all but three of New England’s 136 offensive snaps. He’s the only tight end to receive a target from quarterback Cam Newton, catching three of four for 44 yards.
He went from one of the lowest-rated blockers among tight ends to Patriots top tigh end. Izzo said he worked this offseason to build up his strength, and thus far it shows reports say.

2. He is close to his mother 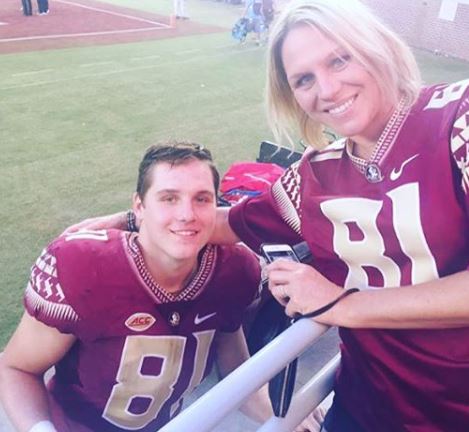 Despite keeping personal life, aside and the fact that he isn’t all that active on his social platforms there is one photo that stands out on his feed and that is the one with his lovely mom, Lorri. He shared the image in honor of his mom’s birthday and captioned it

In addition he also thanked his mom who is a nurse, for her work, saying

All I can do is sit back and admire your strength, selflessness and be proud. Thank you mom and the countless nurses across the world being super heroes everyday. Love you ❤️

Back in 2016, a then 20-year-old Izzo and then teammate Ricky Aguayo -were involved in an incident outside the Pi Kappa Phi fraternity house. The two were suspects in a burglary next door to the house where Aguayo was punched in the face. The pair were accused of smashing a coffee table and ripping a pet turtle in half. The players were seen at 2 a.m. holding the turtle, which appeared dead with its shell ripped from its body.
In the end, the owner of the turtle did not want to press charges and the state attorney declined to pursue the case because no one saw who killed “Turntle.”

4. His pays tribute to late godmother

Ryan’s godmother, who was also his aunt, Lisa; died of breast cancer in 2015. In her honor, he wears a pink bracelet on his wrist that his mother revealed it had turned white because he’s never taken it off.

5. He is not shy when in a relationship

Back in 2015, Ryan tweeted about his then girlfriend, a girl named Hallie