You are here: Home / NFL / Who is Olivier Vernon’s Girlfriend?

Olivier Vernon, the 6 ft 2; 270 lb NFL player who was until recently a linebacker with the New York Giants, has been traded.

News that 28-year-old Vernon has been traded to the Cleveland Browns is out and with a new team and possible move, it can only mean Vernon who is apparently single, might finally meet someone in Cleveland.

Olivier played college football for the University of Miami Hurricanes. He played three seasons before declaring for the NFL Draft following his junior year. He was drafted in the third round by the Miami Dolphins in 2012 as the first Miami Hurricanes player taking by the Dolphins since 2004. 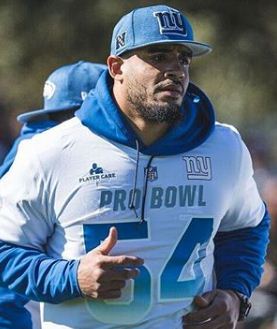 In 2016, he was traded to the New York Giants, that same year he was named second team All-Pro.

Vernon who keeps his private life private, isn’t into social media either which makes it hard to accurately tell if he is dating or not.

Having said that, he is a great catch, even though with an injury history in recent years, he was still the team’s best pass-rusher while playing with the Giants. Olivier also landed one of the big money contracts with the Giants, in 2015 he signed a massive $85 million contract, they signed him to be a 4-3 down defensive end. The then 25-year-old landed more than $50 million in guaranteed money on a five-year, $85 million deal from the Giants in free agency.

During an interview he also may have revealed the real reason of his bachelor nature, back in 2016, he told Steve Serby of the New York Post — in a very enjoyable Q&A — he likes sacks better than ***!