Kyle Boller, the former US quarterback, had more than a fantastic career in the NFL, even though he was often dragged as mediocre. Kyle is known for his many feats in the game and his exciting retirement, where he declared that “the weight of the world has been lifted off his shoulder.” What’s next to know about him would be his personal life, particularly his marriage to Carrie Prejean Boller.

We take an exposition into Ms. California Carrie Prejean’s life, her scandals and wins, marriage, and kids. You’d also get updated about some important aspects of Boller’s life, like his career earnings, what he’s doing presently, and more. Let’s begin with Carrie:

Carrie Prejean Boller is the wife of former US quarterback Kyle Boller. She was born on May 13, 1987 – she already clocked 34 this year. She is born to a French descent father and an Italian American mother. She attended Vista High School and moved on to San Diego Christian College. She is a Christian, following her parent’s religion. She was a volunteer at the Rock Church and the Luv-em-up Ministries located in El Cajon, where she assisted with helping special children with disabilities.

Kyle Boller’s wife, Carrie Prejean Boller, encountered so many twists and turns from cradle to the limelight. She had to go through the psychological pressure of watching her parents split at a tender age. The separation took a drastic toll on her and her sibling. She admitted that the trauma shaped the rest of her life irrevocably.

Despite her hard childhood experience, she ventured into modeling and gradually took over the stage for herself. She got so many exquisite modeling contracts and was the face of frontline brands such as Nordstrom, Saks Fifth Avenue, Target, and so on. After winning the crown for Miss California, Carrie competed in the Miss USA Pageant, where she emerged as the first runner-up.

Kyle Boller’s Wife, Carrie Prejean Boller, had series of controversial scandals that nearly ruined her shine in the limelight. First was her predisposition towards gay marriage, which she made public when asked about the subject at the Miss USA pageant. Right on that stage, she made it crystal clear that she believed a man should only marry a woman according to her Christian beliefs and customary upbringing. This reply set her at loggerheads with many people who do not share her sentiments about homosexuality; it divided her pool of fans and admirers. Despite this, she was able to retain the spotlight.

Another scandal that trailed Kyle Boller’s Wife, Carrie Prejean Boller, happened after she appeared nearly naked on the front page of a popular celebrity blog. Also, during an interview with Larry King, she left the set after she was asked about her lawsuit with Larry, the current Miss California Pageant. This became the wave of the moment until Donald Trump, who owned the Miss USA Pageant, cleared the air on the issue.

Eventually, she got stripped of her title as Miss California owing to claims of continued contract breach. Trump, who had initially supported her, terminated her pageant contract in 2009. She moved on to release a memoir entitled “Still Standing: The Untold Story of My Fight Against Gossip.” In the memoir, she decried bad media and condemned their role in downplaying her whim in the spotlight

Leaving her scandals behind, on July 2, 2010, Carrie moved on to be joined holy matrimony with former US NFL quarterback Kyle Boller.  They are blessed with two children; the first, Christina Grace Boller, came in 2011, while Brody was born in 2013. She and her husband live happily with their children in California. 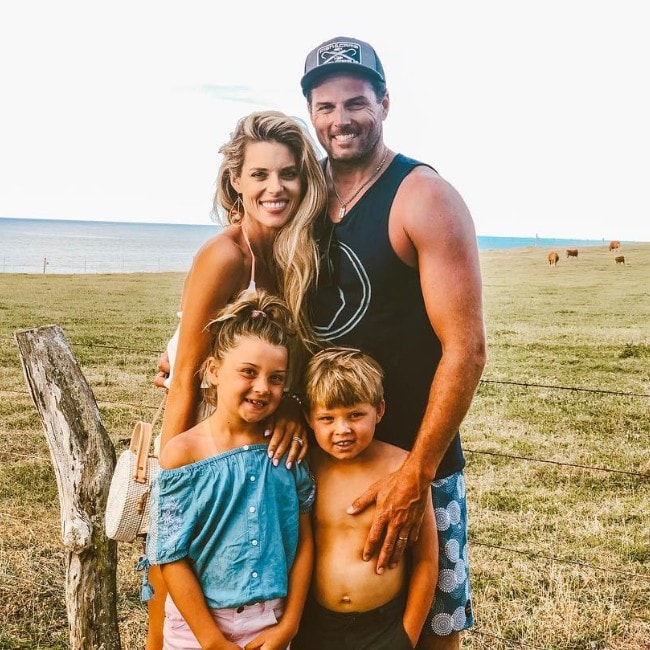 Kyle Boller’s wife, Carrie Prejean Boller, is a multi-millionaire. She has a net worth estimated at $3million. She made most of her career earnings from her modeling and endorsements from big companies with whom she worked at some point.

Carrie Prejean’s husband, Kyle Boller, is also worth knowing about. He was born in 1981 (40 years old) in Burbank, California. He graduated from the University of California. He started his football career in high school, playing for the Hart High School team. He proceeded to play as a college quarterback and moved on to play professional football by joining the Baltimore Ravens in 2003. He was with the Ravens for almost five years. He left in 2009 to play for St. Louis Rams. Before retiring in 2011, he had played for four teams with the Oakland Raiders (2010-2011) and the San Diego Chargers being his last teams.

He made several remarkable feats in his career. He holds the second all-time for most career passing yard for the Baltimore Ravens. He also played 9 career games with no inception and a single touchdown. He has a prominent statistic of 8,931 passing yards, 69.5 passing ratings, and 48-54 touchdowns.

What is Kyle Boller’s Net Worth?

Kyle Boller’s net worth is estimated to be around $7 million. He capped most of his income from playing professional football in America. Also, Kyle Boller’s career earnings stood at a whopping $17.9 after he retired.

What is Kyle Boller Doing Now?

There’s no information about what the former NFL quarterback is doing presently. Let’s assumed he’s living a happy life with his wife and kids. A happy life it is indeed, as he has been seen touring the world with his family.

Carrie Prejean Boller’s story indeed is a motivation because she rose to relevance despite having an unpleasant parenting experience. She could also withstand the storm that came with the many controversies that assailed her modeling career. She is an outstanding woman who is worth emulating. Kyle Boller is a lucky man to have gotten a better half like Carrie Prejean Boller.

Looking for more on the loves and lives of the NFL Quarterbacks Hottest Wives and Girlfriends? We’ve got you covered.

Bonus Video: Carrie Preajean Melts Down During an Interview with Larry King