You are here: Home / NFL / Who is NFL Gareon Conley’s Girlfriend?

Gareon Conley, is set to become an NFL player as he announced earlier this year he would be entering the NFL draft –which will take place this week.

Gareon Rashad Conley was born June 29, 1995.  The Ohio native started playing football in high school and has managed to excel in his short college career as well. The 21-year-old is considered a top defensive prospect.

As a senior at Massillon Washington High School, Conley caught 50 passes, averaged 21.9 yards per catch and scored 16 touchdowns, while on defense he had 13 pass break-ups, an interception and 25 tackles.

6’0” Conley initially committed to the University of Michigan, but later had a change of heart and decided to attend Ohio State instead.

Over the past two years, however, Conley has started every game for the Buckeyes. He was an honorable mention All-Big Ten pick in 2015 (two interceptions, five pass breakups) and then graduated to second-team all-conference as a junior (four INTs, eight PBU).

On November 2016 Conley was named Second Team All-Big Ten by the Coaches and Third Team by the media and decided to ditch his senior year in January.

Young, good looking and with a bright future ahead, Gareon seems to be having everything going for himself, except he is apparently single.

He might not have a romantic interest at the moment but he sure has a special lady in his life. We’re talking about his precious mother, Sherry Robinson.

The mother-son duo are said to be very close. You’ll be able to find everything about the NFL mom in the link below! 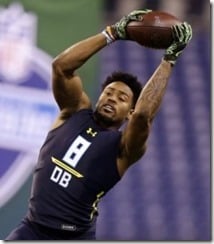 What do you think his mother will have to say about his recent rape accusation? According to reports, the incident

took place at a hotel in downtown Cleveland on April 9. The victim told police she had been raped by Conley in a room at the hotel. Conley was not at the hotel when police arrived.

The news will come as a bucket of cold water not only to his mom but for let’s say, a girlfriend prospect or any woman who had a slight interested in the young player. What do you think? Let’s us now below!