You are here: Home / NFL / Who is Kendrick Norton’s Girlfriend?

Kendrick Norton, the NFL player best known as a defensive tackle for the Miami Dolphins -is apparently a single fella.

The 22-year-old was competing for a roster spot this off-season -when he suffered a horrific car crash that resulted in doctors amputating his arm. The tragic news was confirmed in a statement by his agent.

According to Florida authorities, Kendrick’s Ford F250 overturned after hitting a concrete barrier. One of Norton’s arms became pinned beneath the truck, which landed on the truck’s roof. The crash occurred Thursday morning shortly after 1 a.m. He was transported to Ryder Trauma Center.
Reports say, Kendrick was in the car with a woman who was also injured. Though she is yet to be identified, the female passenger could be a possible girlfriend.

Born June 7, 1997; the Jacksonville, Florida native was ranked four-star defensive tackle prospect by ESPN while in high school.
He was also a three-star ranking from 247Sports, Rivals.com, and Scout.com. In 2015 he was the Under Armour All-American Bowl selection. 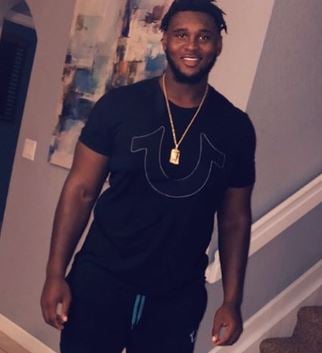 Norton was rated by Rivals.com as No. 26 defensive tackle and No. 33 player in state of Florida regardless of position. He was named to Class3A All-State football team out of Trinity Christian Academy. He was then recruited to play defensive tackle, but played both sides of line with Conquerors. Norton chose Miami over Ole Miss, Auburn, North Carolina and Florida.

Kendrick was selected in the 7th round of the 2018 NFL draft by the Carolina Panthers after starring for the University of Miami. He spent most of his first season on the Panthers practice squad before later signing a deal with the Miami Dolphins. He joined the Dolphins last December.

Norton who is active on social media is close to his family, specially to his mother, LaTess Stephens -however, she seems to be the only woman in his life at this time. We wish him a speedy recovery.
Find him on Instagram here.