You are here: Home / NFL / Who is Justin Herbert’s Girlfriend?

Justin Herbert, the NFL player you know as a quarterback for the Los Angeles Chargers may be a real star on the field but is he hanging out solo, off of it?

You probably already know all about Justin’s football stuff, but what about his personal side?
The 22-year-old is keeping quiet about the details of his romantic life and is not clear if there’s a special lady around.

Though it may appear as if he is single, with professional athletes is hard to tell. He may be in the early stages of a new relationship, who knows. So instead, let’s focus on some of the facts that make him quite the cath for any lucky lady out there.

1. He’s been playing since high school

Born-and-raised in Eugene, Oregon, Herbert played football for Sheldon High School. As quarterback for the Fighting Irish, Herbert was highly under-recruited as a consensus three-star prospect by ESPN, Rivals and 247Sports. He chose Oregon over Montana State, Nevada, Northern Arizona and Portland State.

2. He became a starter as a freshman at Oregon

Herbert became the first true freshman to start at quarterback since 1983 after replacing Dakota Prukop mid-way through the 2016 season. He made seven starts the rest of the way and finished as one of four FBS quarterbacks with 15 or more touchdowns and five or less interceptions.

3. He is also very smart 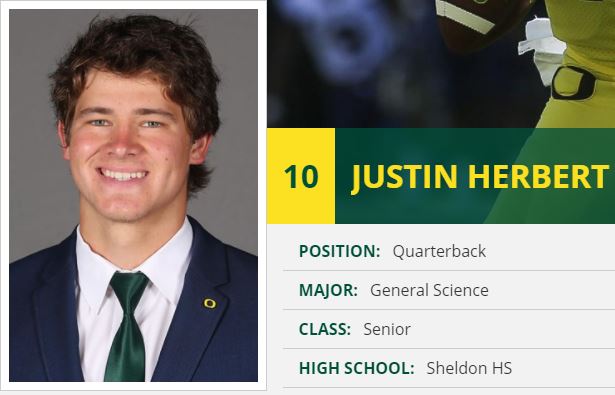 Through his time at Oregon, Herbert matured into one of the top quarterback prospect in the nation. Herbert’s not only blessed with unbelievable talent on the field, but beyond the locker room. He entered his senior year with an incredible 4.01 GPA. It’s safe to say his athletics goes along with his brains; excelling as a biology major, balancing both school and sports.

4. He is also a starter for The Chargers 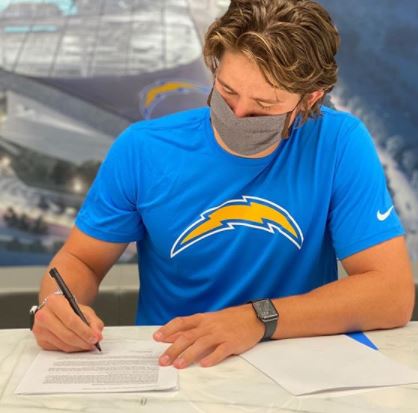 The Chargers selected Herbert with the sixth pick of April’s draft. Herbert, who has drawn comparisons to Ryan Tannehill and Carson Wentz, showed exactly why the Chargers named him their starter; he made his first NFL start in Week 2 finishing with 311 passing yards, one touchdown, one interception, and one rushing touchdown. He became only the third player in NFL history to pass for at least 300 yards and rush for a touchdown in his first career game.

5. He is active on social media

Herbert, like most NFL players his age is into social media and is active on Twitter and Instagram -where he has nearly 200k followers. He isn’t quite good in updating his feed often but he is getting there.