You are here: Home / NFL / Who is John Brown’s Girlfriend?

John Brown, the NFL player you most likely recognize as a wide receiver currently playing for the Buffalo Bills, is currently single?

Born April 3, 1990; the Homestead, FL; native spent a year at Mars Hill College then redshirting at Coffeyville Community College, he transferred to Pittsburg State University. During this time he set records for receptions, receiving yards, and receiving touchdowns.

Brown was taken 91st overall by the Arizona Cardinals in the 2014 NFL Draft. He was on the 2014 Arizona Cardinals team which set a record for futility with 78 total yards of offense in a playoff game. He broke the 1,000 yard receiving mark in his second season, finishing with 65 catches, 1,003 yards, and 7 touchdowns.
He played with the Cardinals until 2017 and signed a one-year, 5 million contract with the Baltimore Ravens in 2018. After one year in Baltimore, John Brown signed a three-year, 27 million contract with the Buffalo Bills in 2019. 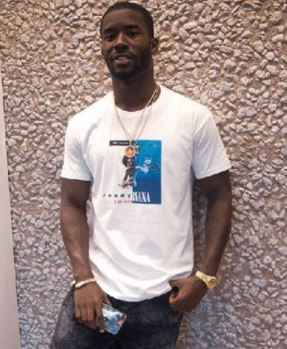 At 30-years-old, Brown who is widely known as Smokey, is yet to be married and appears to be currently single. The NFL star seems to be pretty tight lip when it comes to his personal details despite being a famous professional athlete.
Though there is no official word on his current status, it is safe to say he’s been in significative relationships in the past. In fact, he is the proud father of a daughter named Caia. There’s no official word on who his baby mama is.

He addressed his daughter when in an interview he talked about his health problems at the time, wouldn’t allow him to play with his little Caia. The receiver had a cyst removed from his spine in 2016 and was diagnosed with sickle cell trait.

A few years ago there was talk about a girlfriend, in an ESPN article which goes to say his then girlfriend taught him how to cook. According to the article, his girlfriend spent a month in Arizona with him and spent every day teaching him how to cook.

Brown isn’t into sharing much on social media; though he is active on Instagram -where he has over 38k followers, it seems sharing photos isn’t his thing as he doesn’t update his feed that much. Since Brown is very secretive about his love life, it’s safe to say the only girl in his mind is his daughter.