Kelsey Crawford is the lovely wife of NFL player, Tyrone Crawford –currently a defensive tackle for the Dallas Cowboys.

Kelsey’s hubby is grabbing headlines after the 29-year-old NFL stud got into a bar brawl and there’s video footage to prove it. According to TMZ, Crawford had no problem taking down not one but a few bouncers at the Coyote Ugly Saloon in Panama City Beach, Florida. The incident which took place earlier this month, could mean Crawford might punished if the NFL finds his actions violated the PCP.

Crawford was born November 22, 1989; the Windsor, Ontario native was a three-sport athlete while in high school and was recruited by Boise State and Michigan University. He ended up attending Bakersfield College and Boise State, before being selected by the Cowboys in the third round of the 2012 NFL Draft.

He’s been happily married to the stunning Kelsey, since 2016. There’s even a YouTube video of the couple’s wedding day which took place at the W Hotel in Dallas, Texas. 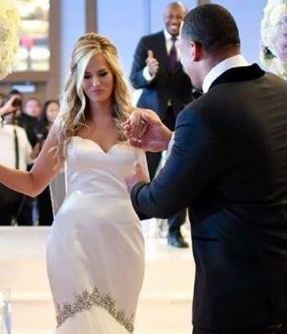 The lovely Mrs. Crawford was born Kelsey Marie Mills on July 17, 1991. The blonde is a Real Estate Agent at Ebby Haliday Realtors. According to her LinkedIn, she attended Bakersfield University for a year and later graduated in 2013 from LSU –with a Bachelor of Science (B.S.), Marketing.

Previous jobs include working at Blue Cross and Blue Shield of Louisiana. While attending LSU, Kelsey was a student-athlete as she served as the LSU Club Volleyball president.

Since the couple’s nuptials, they have welcomed one child together. Kelsey gave birth to an adorable baby girl, Mia on June 9, 2018.

You can find the NFL wag and mom of one on Instagram here.