You are here: Home / NFL / Who is Trumaine Johnson Girlfriend?

Trumaine Johnson, the NFL player known for his career with the Los Angeles Rams turned 30 and appears to be currently single.

And things are not getting easier for the 30-year-old Cornerback who has been apparently cut from the Jets.

Born Trumaine Monte Johnson on January 1, 1990. He was Raised in Stockton, California to parents Curtis and Lynne.
Johnson enrolled at the University of Montana in 2008 after being an unranked wide receiver coming out of high school. He would finish his University of Montana career as a two time FCS All-American.
He was selected by the then-St. Louis Rams in the third round of the 2012 NFL Draft. He was named the NFC Defensive Player of the Week during week 1 of the 2017 NFL season. 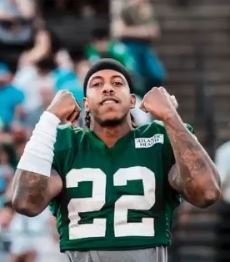 He’s played with Los Angeles Rams since, finishing the 2015 season with 7 interceptions, which tied him for third-most across the NFL.
He inked a five-year, $72.5 million deal with the team in March 2018. That deal made him the second-highest highest-paid cornerback in football, and his guaranteed $34 million was the highest among his position.
However, he’s been dubbed, one of the worst signings in franchise history, after playing just 17 games over two seasons due to injuries. Johnson missed five games in 2018 with a strained quadriceps and then was a healthy scratch in the final game of the season for repeated rules violations.

As for his personal life, who knows whats happening behind closed doors, but judging from his social media he seems to be currently single. He also has managed, quite stunningly for an NFL player, no to father any kids.

He appears to be good friends with actress and comedian Jonica “Blu” Booth who is known from the 12th season of Oxygen’***** reality series Bad Girls Club. Question remains, who is Trumaine Johnson’s special lady?