Tishana Holmes is the wife of NFL player Adam “Pacman” Jones –the cornerback and return specialist for the Cincinnati Bengals.

Pacman, was drafted in the very first round with the sixth-overall pick in the 2005 NFL Draft by the Tennessee Titans. He played college football at West Virginia. Jones has additionally played for the Dallas Cowboys.

The 33-year-old veteran started 16 games for the Bengals last season and registered 66 tackles, seven passes defended and one interception.

He was named to the Pro Bowl in 2015. Pacman has 15 interceptions to his credit during a 10-year NFL career. 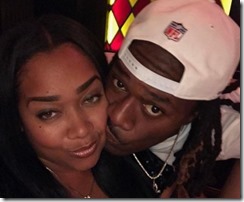 1. Teshana Holmes and Jones had a long courtship

The couple dated for nearly a decade before getting married three years ago. Tishana who is a Memphis native dated Jones for eight years.

2. The couple had a nice Atlanta wedding

The couple tied the knot July 5th, 2014. NFL Hall of Famer Deion Sanders was Pacman’s Co-Best Man at the ceremony.

The are the proud parents of two daughters. Tishana Holmes gave birth to the girls, 11-year-old Zaniyah and 6-year-old Triniti; out of wedlock. She is currently expecting the couple’s third child, a baby boy.

4. Tishana gave birth to their second daughter at 23 weeks

Trinity Jones was born more than four months premature. She spent more than a month in the hospital—pulled through, and Adam and Tishana were able to bring their daughter home.

Teshana and her hubby have been so close that in 2013, they were arrested together. According to Michronicleonline, Jones was the passenger in a vehicle that was being driven by Tishana Holmes, who was pulled over by police for allegedlydoing 60 in a 45 mph zone. Officers reportedly asked Holmes to take a breathalyzer test, and when she refused, she was cuffed for suspicion of driving under the influence.

6. Her man is well known for his bad boy behavior on and off the field

Pacman was arrested and charged with assault after allegedly socking a woman outside a Cincinnati bar in 2013. Then a month later, Jones was arrested again on another disorderly conduct charge. He pleaded guilty to the disorderly conduct charge in exchange for having the resisting-arrest charge dropped and was sentenced to a $250 fine and 50 hours of community service.

He was suspended in the NFL for the whole 2007 season as well as for part of the 2008 season for off-the-field actions.

7. She is credited with helping her hubby ‘relax’

Her hubby who had been known as a sport villain, has found ways to relax. According to an interview, he said those include golf, cooking, horseback riding and of course his family.