Morgan Hood was until recently the pretty girlfriend of college football player, Brian Maurer. However, a creative miss Hood apparently just broke up with Maurer via TikTok.

Morgan’s ex boyfriend is currently a quarterback at University of Tennessee; he has played in seven games and had two touchdowns and five interceptions for the school.

Brian Anthony Maurer was born January 6, 2001 to mom Kyla Lester. He attended West Port High School in Ocala, Fla. -where he was an elite 11 quarterback and set the Marion County single-season passing record in 2018 with 3,543 yards and 34 touchdowns.

Brian finished his high school career with a county-record 7,664 yards and 64 touchdowns. He led West Port to a state-record 876 yards of total offense and 39 first downs in a 77-67 loss to Oconee in 2018, completing 34-of-53 passes for 513 yards and three touchdowns and adding 195 yards and three scores on the ground. He is the recipient of Jack Clark Athletic Scholarship Endowment.

According to his Tennessee profile, he plans to major in communications. The 18-year-old is currently single fella as girlfriend Morgan Hood recently dumped him. Brian was quick to reply and posted on Instagram “girls do anything for they 15 seconds of fame” -and in fact, here we are talking about miss Hood. It appears the two had been dating since 2018. 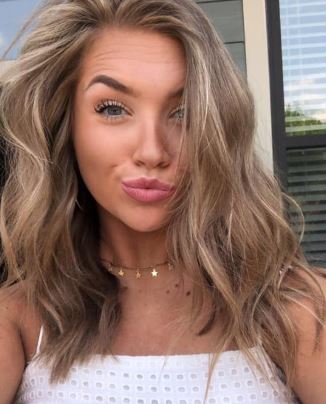 Morgan is the daughter of Chris Hood and Amber Casteel Hood. She has a younger brother named, Mason Hood.
According to her social media, the lovely blonde is originally from rom Nashville, Tennessee. She attended and graduated from Beech Sr High School.

A LinkedIn profile states that pretty Morgan Hood is currently a student at University of Tennessee, Knoxville. She is a public relations, advertising and applied communications student set to graduate in 2022.
Morgan appears to be the popular type, she has over 700 friends on Facebook and over 4k on Instagram. She keeps quite active often posting images with friends and family. From her feed we can also tell she is a dog personal and that she loves to spray tan.