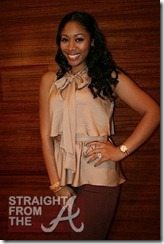 Ronnie and Taylor Anderson Brown. The couple got married and people still question if money was the reason why these two tied knots.

Ronnie and Taylor did get married and she is indeed beautiful! By the way, she was not pregnant when they decided to give the next step.

Taylor is on here trying again. Taylor and Ronnie must be doing something right because they have all of the haters out there. Congrats to them and I wish them the best.

These guys make an adorable family!

The marriage took place in Atlanta and it was more than likely nice.Good luck and best wishes to Taylor and Ronnie.

Taylor loves haute couture. She adores Louis Vuitton and once was seen in a store opening here in the States.

Taylor Anderson is a senior at Auburn University. They have been together for over two years, she is on all his draft pictures and he talks about her always. He refers to her as Filet Mingon and says the other girls are cheeseburgers compared to her. He flies Taylor to Miami on the regular and he also visits Auburn on the regular to be with her.