Maria Spagnuolo is the proud and loving wife of NFL coach, Steve Spagnuolo –her husband was recently named interm head coach of the New York Giants.

A 36-year coaching veteran, including 19 in the NFL, Spagnuolo (pronounced SPAG-no-low) has coached for teams that have made 9 playoff appearances, won 6 division titles, played in 5 conference championship games, earned 2 conference titles and won a Super Bowl.

Born December 21, 1959; the Massachusetts native; was a two-year starter at wide receiver for head coach Howard Vandersea at Springfield College, where he was named the school’s Male Scholar Athlete of the Year in 1982. He earned a bachelor’s degree in physical education from Springfield and a master’s degree in sports management from the University of Massachusetts.

He was first hired by the Giants on Jan. 22, 2007, after an 8-year stint on the Philadelphia Eagles’ coaching staff. In his first two games as coordinator, the Giants allowed 45 and 35 points in losses to Dallas and Green Bay, respectively.

As the Giants head coach, Maria is set to become the team’s first lady. Married since 2005, Maria Spagnuolo has been an active coach’s wife participating in community outreach through The Spagnuolo Foundation. 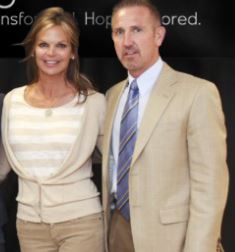 The two met on a blind-date and the couple didn’t go out alone until the third date. Steve and Maria Spagnuolo were married at the Vatican in Rome in a small, quiet ceremony on July 9, 2005. Faith is an important component of the couple’s life.

Speaking about his wife, coach Spagnuolo has said

“My wife is so unique and special,” “She never has a weak moment. She is an amazing person. I believe the reason she is like that is because she has Christ in her. That’s where I think it comes from. I’m not always like that. I fail all of the time. But she has it. And how lucky I am to have someone with me like that every day.”

Maria Spagnuolo is known for being a passionate advocate. She also serves as chair of Mercy Ministries.