Hallie Gostkowski is the lovely and supportive wife of NFL player, Stephen Gostkowski –whom ya’ll know best as a placekicker with the Patriots.

He played college football at the University of Memphis and in 2006 was one of only two kickers drafted in that year’s NFL draft. The Patriots chose him and Stephen became the only rookie kicker to make an NFL roster that year.

The two time super bowl champ and four time pro bowler is currently the Patriots’ all-time leader with 1,613 career points and 340 field goals. He’s also been named Associated Press All-Pro First Team in 2008 and 2015 and AP All-Pro Second Team in 2014. He’s led the league in scoring for at least five-seasons.

In a few words, Hallie’s husband knows what he’s doing out there. Now is time to get to know her better. 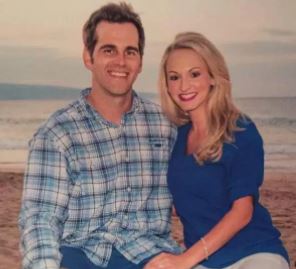 She became Mrs. Gostkowski in 2008 after a few years of dating and doing the long-distance thing following her then boyfriend’s hot job as a rookie with the Patriots –and she stayed in Tennessee.

Hallie Gostkowski was born Hallie Swearingen to parents Gary and Kathy. The Memphis, Tennessee, native attended Huston High School in Germantown, Tennessee. She went on to study nursing at the University of Memphis –where she and Stephen first met.

Being a nurse probably comes in handy for her hubby who’s been injured a number of times on the field. Following their April 19, 2008 nuptials, they have welcome three young children. The lovely wife is the proud mommy to two sons Slayden and Gannon; and one daughter born in 2016.