Stephanie Acevedo is the stunning girlfriend of NFL player, Antonio Brown -who was until recently a player with the Patriots.

Stephanie’s NFL beau began his career with the Pittsburgh Steelers in 2010 -after attending Central Michigan University.
In 2011, he became the first NFL player in history to compile over 1,000 returning and receiving yards in a single season. In 2013, he finished second in the NFL in receiving yards with 1,499.

Brown who was also a competitor on season 22 of ABC’s Dancing with the Stars -is the father of five children, three of them with longtime girlfriend Chelsie Kyriss.
The seven-time Pro Bowler remains unsigned after being dropped by the Patriots in September. However, he seems to be having fun with the bombshell, Stephanie Acevedo.

Stephanie Janet Acevedo was born October 11, 1987. She has one younger brother who on Instagram goes by @holy_ghost305. 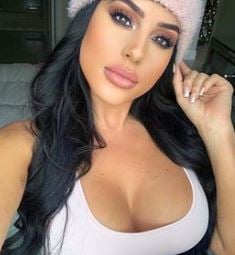 The stunner isn’t exactly a stranger. Acevedo is a glamour model and singer and also a reality TV star. The curvy singer is a cast member on VH1’s Cartel Crew. On the show, Acevedo talks extensively about her father’s past as a drug trafficker. However, he was unfortunately arrested for his role as a trafficker “in the cartel.”

Acevedo who is half-Cuban and half-Puerto Rican -was raised in Miami and signed a record deal with Young Money Entertainment in 2015. Since then, she’s done a bit of everything. Stephanie Acevedo graduated from Miami Dade College as a medical student. She has covered magazines, did work on Telemundo, and even had a job as a ring-girl in the Championship Fighting Alliance MMA league.

However, she most recently keeps busy recording music. She has released three singles including ‘Boom Boom’ ‘Te Equivocaste’ and ‘Acercate’
Stephanie Acevedo has also been associated with Lil Wayne and Mack Maine in the past.

Acevedo and Brown came together after she was featured on Brown’s upcoming album.
Find Stephanie Acevedo on Instagram here.