You are here: Home / NFL / Who is Stefon Diggs’ Girlfriend?

Stefon Diggs, the 6 ft 0 in NFL Wide Receiver currently playing with the Minnesota Vikings is apparently a single 24-year-old.

Born Stefon Mar’sean Diggs on November 29, 1993; the Gaithersburg, Maryland native is the son of Stephanie Diggs and has a brother named Trevon.

attended Our Lady of Good Counsel High School and played in the U.S. Army All-American Bowl in 2012.

Diggs was the second-ranked receiver in the nation coming out of high school according to Scout and Rivals. He accepted an athletic scholarship to attend the University of Maryland –where came in second in the ACC Freshman of the Year voting in his first season.

He then forego his senior season and entered the 2015 NFL Draft. Diggs never played a full season in College Park, but finished with 150 career receptions for 2,227 yards and 14 touchdowns before declaring for the draft after his junior year. He famously led Maryland with 62 catches for 792 yards and five touchdowns last season despite suffering a lacerated kidney that sidelined him for two games. 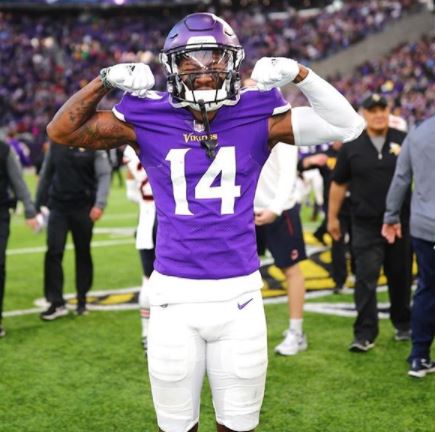 He was a fifth-round pick of the Minnesota Vikings and officially signed his first rookie contract with the team in May 2015.

Diggs who seems to be giving his game, all of his effort and focus –and that goes to show on his miracle touchdown that took place over the weekend against the Saints and which has made the team advance to the NFC Championship –has apparently forgotten to get himself a special someone to celebrate with.

After taking a few minutes to browse through his social media, the NFL player even appears to have celebrated his 24th birthday by himself –according to an Instagram photo.  For his birthday he captioned the image “24 …And all I wanna do is tell God Thank you”

Doesn’t he sound just like a great catch!  Not bad looking, talented, rich and even spiritual …what else could a lady want? We foresee in the near future more football glory and a cute girlfriend to celebrate all of his success.