Shawna McKnight is the lovely and supportive girlfriend of NFL star, Aldon Smith –currently a linebacker with the Oakland Raiders.

Shawna’s NFL beau was born Aldon Jacarus Smith on September 25, 1989. Prior to his NFL career, the Greenwood, Mississippi native played college football at Missouri –where he majored in Real Estate. He was picked up by the San Francisco 49ers in the 2011 NFL Draft.

While playing with the 49ers, he helped the team reach the Super Bowl in 2013, they were defeated by the Baltimore Ravens. He set the 49ers single season sack record with 19.5, became the fastest player in NFL history to reach 30 sacks (27 games into his career) and was selected to his first Pro Bowl in 2012.

In 2015, he signed a one-year contract with the Raiders. He finished his first and only season with the Raiders with a total of 28 tackles and 3.5 sacks in 7 starts and 9 games.

The 28-year-old is currently suspended following a hit and run arrest in which cops say he was also drunk. Smith is currently awaiting reinstatement and hasn’t played since 2015. 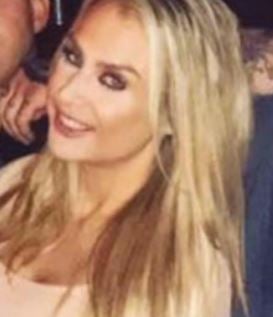 2018 began on a good note for Smith who popped the question to Shawna on Valentine’s Day. The blonde said yes however the exact status of their relationship is unknown after he is said to have attacked his fiancée, over the weekend. Reports say Aldon bit Miss McKnight on Saturday night and has currently checked in to rehab for substance abuse.

McKnight, described as a personal trainer, began dating Smith less than six-months ago. According to TMZ her parents consider him family and she’s glad he’s getting the help he needs. Her NFL beau is also the father of a five-year-old son with an ex-girlfriend.

According to her LinkedIn, the gorgeous blonde studied Broadcast Journalism at California State University-Chico. She previously worked at Kimpton Hotels & Restaurants as a Beverage Director. She is currently employed at the Sports Blonde.