Stacey’s baby father was spotted by cops crossing the double lines to enter the carpool lane on I-85 earlier this month. The 37-year-old WR was stopped after the big no-no but things didn’t end there.

Turns out police found out, White had a warrant out for his arrest after he allegedly blew off a court date from a previous legal situation.

White is one of the greatest players to ever play college football at UAB, leading the school to its first bowl appearance.

Roddy born Sharod White, is considered one of the best receivers in Falcons history. In his 11-year career, he caught 808 passes for 10,863 yards and 63 TDs. He recorded over 1,000 receiving yards for six straight seasons with the Atlanta Falcons from 2007 to 2012. He was named to four consecutive Pro Bowls from 2008 to 2011. He announced his official retirement in 2017 after not playing since 2015. 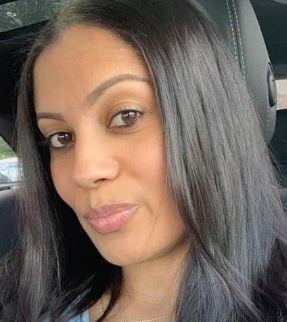 Roddy is the father of three children, one of them via his ex-girlfriend, Stacey Hott.

Though the pair’s romance didn’t work out, they do share one child together. Back in 2011, Roddy acknowledged paternity to Stacey’s son. She then filed for child support and the suit was settled for $3,200 a month.

According to her LinkedIn, the baby mama has worked at a national bank chain in Atlanta since 2006. The curly haired brunette is originally from San Leandro, California.

She attended Capella University where she studied Business Management, Marketing and Related Support Services. She is currently a Financial Center Manager at Bank of America. Stacey keeps a relatively low profile, she isn’t a huge fan of social media however she keeps active on Facebook and Instagram –which she keeps on private. Is not exactly clear why the ex’s couldn’t make it work which is a shame because Stacey Hott is one fine lady. In addition to the son she and Rodd share, Stacey is also the mother of a daughter.