Grete Sadeiko is the gorgeous girlfriend of NFL player Robert Griffin III. The stunning gal went from being his fiancé to baby mama in no time!

The two began dating in 2016 following Griffin’s divorce from his wife, Rebecca Liddicoat. He and Liddicoat met while attending Baylor and began dating in 2009. The two tied the knot in 2013 and welcomed one daughter, Reese Ann Griffin in 2015. However, their marriage ended in 2016.

The 2011 Heisman Trophy winner, was drafted 2nd overall by the Washington Redskins in 2012 and went on to win the NFL Offensive Rookie of the Year award. After four years in Washington, he signed with the Cleveland Browns in 2016.

Griffin who set 26 single season records, 20 career records, and 8 single game records while attending Baylor announced his engagement to Grete in May.

Want to know more about the lovely blonde? Read her top facts below! 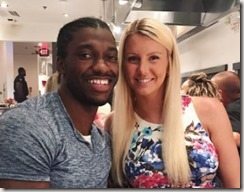 1. She hails from Estonia.

2. She happens to be a fellow athlete.

The 5 ft 10 in gal is a heptathlete. A heptathlon is a track and field combined events contest made up of seven events

3. Grete Sadeiko comes from a family of athletes.

According to her Seminoles bio, Grete Sadeiko has athlete blood running through her veins. She comes from a long family line of heptathletes, including her sister Grit, who competed in the 2012 Olympics, as well as her mother, Deivi Sadeiko.

5. She moved to the US in order to attend college.

The blonde has lived in the US for a few years now after she began college in 2012 at Florida State University. While living in in Sarvere, Estonia, she attended Turi Uhisgumnaasium high school.

6. She is fluent in several languages.

7. She is active on social media.

Grete is active both on Twitter and Instagram where she has gained a decent following. She is very supportive of Griffin and often posts little encouragement messages for her man.

Grete and Robert Griffin welcomed a daughter, Gloria Griffin on July 2nd, less than two months after they announced their engagement.