Raquel Torres is the lovely girlfriend of NFL player, CJ Anderson –currently a running back for the Los Angeles Rams.

He began his NFL career as a member of the Denver Broncos in 2013. He helped the Broncos capture Super Bowl 50 in 2016. After brief stints with the Panthers and the Raiders, he signed with the Rams last December.

Anderson’s personal life has been a bit more stable, he’s been dating the lovely Raquel Torres for a few years now. 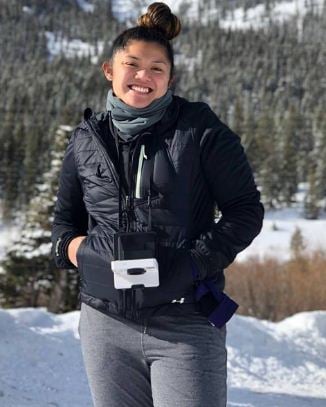 Raquel Torres is a California native born to parents Ramon and Marah Torres on March 14, 1994. Raquel has one older brother named Raymond.

Torres who is also an athlete probably bonded with Anderson thought their passion for sports. She was a star basketball player all through college.

After Torres graduated from Bethel in 2012 she enrolled at City College of San Francisco and then transferred to MSU (Metropolitan State University of Denver.

She then played at City College of San Francisco for two seasons. She redshirted for MSU during the 2014-2015 season. In 2017, she was named to the 2017 WBCA Good Works Team. She graduated MSU majoring in biology.