Eileen Edsall is the loving and supportive wife of many years of football coach Randy Edsall. Her husband is the current head coach at the University of Connecticut. Though her husband might the boss for the UConn huskies, we have the feeling the boss at home is, Elieen Edsall. Keep reading to find out more about her.

Most recently he served as director of football research-special projects for the Detroit Lions of the National Football League (NFL).

Edsall was named the 34th coach in Maryland football history in January 2011. He led the Terrapins program to back-to-back bowl appearances in 2013-14. In those two seasons, Maryland recorded the school’s first back-to-back winning seasons since 2002-03.

Now, he is back, six years after he left UConn. 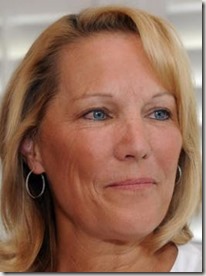 The lovely Eileen Edsall has been Randy’s supportive wife since their marriage in 1983.

The former Eileen Smith and her future husband met while both studied at Syracuse University.

At the time she was a basketball and volleyball standout.

Eileen’s father, Gary Smith, was a Rochester (N.Y.) City Court judge and Monroe County legislator. She grew up as the middle child of five siblings in Rochester. Accoridng to the baltimoresun, she often practiced with her brothers’ athletic teams.

She is also the mother of the couple’s two children: daughter, Alexi and son, Corey.

The blonde has been described as a sweetheart and has been praised for her ability to remain stoic after that dreadful 2011 first season at Maryland –in which her hubby was roasted by local columnist after losing eight straight games. She’s said about her husband

“I almost think sometimes people see him as some sort of a cartoon figure, like he doesn’t have a real life, like he’s been conjured up, like he’s this machine or something,” “I think they portrayed him as some dictator. Yeah, he has rules. With 85 guys, you’d better have rules. Is he unreasonable? No. I think he’s fair. Maybe if it’s not what you’re used to, you see it as unreasonable.”

.You can find the lovely Eileen Edsall on Facebook here.