Haleigh Mullens is the stunning wife of NFL player, Nick Mullens -whom you know best as a quarterback for the San Francisco 49ers.

Haleigh’s NFL stud hubby known for his college football career and played for the Southern Miss Golden Eagles football team.
Born Nicholas Clayton Mullens on March 21, 1995; he is the grandson of Ernie Tabor, former pitcher for the Philadelphia Phillies.
He was a starting quarterback in high school for Spain Park and later went to the University of Southern Mississippi. He made his college debut in 2013 and in May of 2017, he signed with the San Francisco 49ers as an undrafted free agent.
Mullens entered the NFL in 2017 as an undrafted rookie from Southern Mississippi. He was cut at the beginning of his first two seasons but remained with the 49ers’ practice squad. 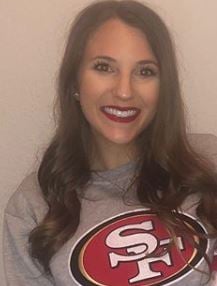 Haleigh Mullens was born March 24, 1994; her parents are Kellie and Kiley Hughes. She has two younger brothers.

The happy couple has been together since college, and they were married in July, 2017. Pretty Haleigh who like her man attended the University of Southern Mississippi -where she was a cheerleader. The brunette who was a member of Kappa Delta majored in liberal studies and science and a minor in psychology.
Nowadays the NFL wag spends her time working as an elementary school teacher and being a mommy for the couple’s son Luke. She teaches 4th-grade teacher at Oak Grove Upper Elementary.
Haleigh Mullens describes herself on social media as ‘Proud Wife • Mommy to Luke and Scout ??? • Southern Miss/ KD Alum • Teacher • MS/CA ?’