Lacy Shaw is the girlfriend of NFL player, Nick Chubb –currently a running back for the Cleveland Browns.

Lacy’s boyfriend finished 2018 as the NFL’s highest-graded running back.

According to reports, Nick wound up with 996 rushing yards and eight touchdowns, in addition to 20 catches for 149 yards and two receiving touchdowns. Pro Football Focus even named Chubb as their top overall running back this season.

Nick was born Nick Jamaal Chubb on December 27, 1995; the Cedartown, GA native was recruited out of Cedartown High School where he played football and ran track.

The running back for the University of Georgia Bulldogs was a first-team All-SEC selection during his freshman season in 2014. He was ranked as a four-star recruit by both Rivals and Scout. He helped Georgia reach the 2017 NCAA Championship game. He majored in Agriculture and Applied Economics. 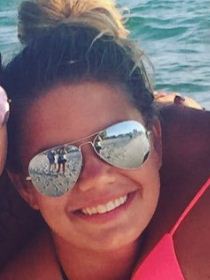 Nick was selected in the second round of the 2018 NFL draft by the Cleveland Browns. Throughout his career, girlfriend Lacy Shaw has been by his side.

The lovely gal met Chubb while they were both students at Cedartown High School and have been dating since. The two also attended University of Georgia together. It is not clear if the two are still together since there is no current social media evidence. Neither Lacy Shaw nor Chubb have photos of the two on their profiles, however several sites believed they are still going strong.

21-year-old Lacy who can also be found as Laci, was born Laci Meleah Shaw, according to Fabwags, she is currently a bartender at Cloud Athens in Georgia. Unlike most NFL wags, Laci/Lacy Shaw seems to be the kind that enjoy a private profile.