You are here: Home / NFL / Who is NFL Correspondent Jane Slater’s Boyfriend?

Jane Slater is an NFL Network reporter and media personality -who recently revealed she was once humiliated by her boyfriend via FitBit.

Jane, a talented and stunning young woman was once the victim of one of women’s worst nightmares. She recently revealed her once boyfriend was cheating on her via FitBit. The blonde found out about it in a horrible way too.

Jane Slater revealed the true story in response to the tweet about the Peloton holiday ad that recently went viral.
She took to Twitter and said she learned an ex-boyfriend was cheating on her, thanks to his Fitbit. She went onto explain that her ex’s “physical activity levels” spiked when he was “unaccounted for” at 4 am. She also went onto reveal that her ex-boyfriend had actually gifted her the Fitbit for Christmas.
At the time, Jane Slater was rightfully upset however, with time she’s learned to look at the funny side. She added “My girlfriend once said ‘one day we will laugh about this’ as I sobbed uncontrollably in the car. I have now many times bahahahah.” 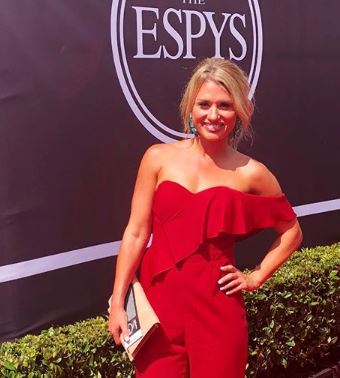 Jane majored in both Journalism and Government at the University of Texas at Austin, where she graduated in 2004. she started her career in radio, where she worked for KTVT CBS 11, KRLD News Radio, WFAA Ch. 8, and 105.3 The Fan in the Dallas region.
Prior to joining NFL Network in 2016, Slater worked for ESPN as an anchor and sideline reporter for the Longhorn Network. She also worked on the College World Series and college football bowl games for the SEC Network and ESPN.

She is currently a reporter for NFL Network, appearing on several NFL Media properties. In addition, she serves as host of The Boys & Girl podcast on FOX Sports Radio.
Though many would like to know the identity of Jane’s ex, she was graceous enough not to reveal his name.