Chargers linebacker, 28-year-old Larry English sure had a SundayFunday! or try weekend! He was spotted having a romantic dinner-date with gorgeous lingerie model Nicole Williams.

The two were seen out for dinner at Madeo in L.A. over the weekend according to TMZ; are they an item? Because they sure looked like one!

We are not quite sure, but it seems like the’ve been hanging out for a while now; Larry sure knows how to treat a lady. Let’s get to know her better.

In case her face looks familiar she is the one to blame for famously teasing Robin Thicke in a **** photo shoot for Treats! mag. In fact, that was such a cool moment for her career that she shows off the image on her twitter profile photo.

Nicole who has posed in her undies for the La Senza lingerie website, also was in the cover of Alwayz Therro November 2012 **** Issue. 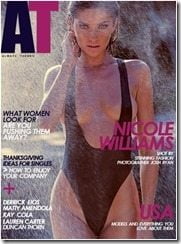 Ever since her popularity skyrocketed for famously teasing Robin Thicke her moves have been followed by the media. She is not afraid of showing some skin and last year she posted a video of herself where she is seen topless during a shoot where she is trying to sell loofahs!

Do you think she and chocolate, Larry English make a good couple? She definitely fits the NFL girlfriend profile.