Elizabeth Mularkey is the supportive and proud wife of NFL coach Mike Mularkey –whom you know best as the head coach of the Tennessee Titans.

Elizabeth’s husband has over two decades of NFL coaching experience, including four-plus seasons as a head coach and eight as an offensive coordinator, with coaching stops in Jacksonville, Atlanta, Miami, Buffalo, Pittsburgh and Tampa Bay. In five of his eight seasons as a coordinator, Mularkey’s teams went to the playoffs.

The Florida native was born Michael Rene Mularkey on November 19, 1961; he played tight end at the University of Florida from 1980 to 1982.

Behind Mularkey’s success story there’s definitely the lovely Elizabeth Mularkey, his wife of many years. 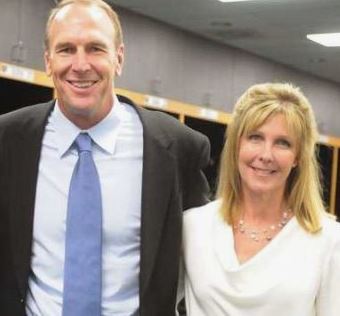 Elizabeth Mularkey is the former Elizabeth Conant, born January 26, 1960. Mrs. Mularkey who also goes by ‘Betsy’ met Mike while they both were students at University of Florida. Long story short they met, began dating, fell for each other and were married in Florida in 1984.

Mike and Elizabeth Mularkey are the proud parents of two sons. She gave birth to first son Patrick in 1986, and Shane born in 1992.

Patrick Mularkey who is the Lions’ pro scouting coordinator; previously worked for the Jacksonville Jaguars for four years, including one year when his father was the head coach. Shane Mularkey, played football at North Carolina.

Elizabeth Mularkey is a real star among coach’s wives. She’s often seen on the field supporting her husband while on coaching duties. Check out her photos below.