Michel is an accomplished athlete unto herself, competing at the national level in track events as a child and teen. Her track and field accomplishments paid off, leading to a full boat scholarship to UNLV. She was born November 29, 1983 in Los Angeles, California. Her parents to parents to Michael and Darlene Hunt.

According to a short bio, she carried this passion for running through high school and in 1998 at J.W. North High she became the Ivy League Champion in the 400 meters as a freshman, and a Varsity two-year letter winner in track and field by her sophomore season.

After graduating with a degree in communications, she taught 7th grade history to students at risk. Today, she runs a philanthropic group for children and a salon –7 Image, that provides skin care services, hair care, eyebrow services. During an interview when she was asked about the name of the salon –Michel being very spiritual –said:

Seven is my favorite number. It’s God’s number and it means complete. So 7 Image is the same as saying Complete Image.

The 2010 offseason was a big year for Darren Sproles. He not only signed a monster contract with the New Orleans Saints, but he also married the former Michel Hunt. 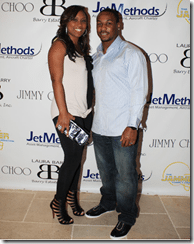 Michel and Darren who were long-time boyfriend and girlfriend are the proud parents of two girls, Devyn and Rhyan. 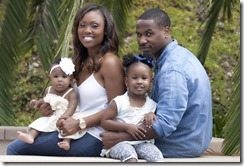 According to an interview she did for madamenoire.com last October, she revealed about 18 months after she gave birth to the couple’s second child, Rhyan, she noticed a thickening in her left breast and following her gut feeling she went to different health appointments until she was diagnosed with DCIS, Ductal Carcinoma In Situ, also known as Stage Zero cancer. Seven days after getting the initial prognosis she decided to removed both breasts.

Michel has been there for her man, and the couple is facing some unfair treatment? Michel took to her instagram to defend her hubby about being rumored to be cut and ultimatley haxed from the New Orleans all through twitter!

I am so disappointed in the Saints organization & the way they are treating my husband. I understand this is a brutal business but when u have a good guy who works hard & does a lot for the community u would think they would show a little more respect. To verbalize to him that they will release him so at least he can choose the team he wants to spend his last few years in the NFL on & then take it back without a word & try to trade him is f**ked up … I no I have no control over this & God is gonna work it out but in the mean time I’m gon vent & talk s**t. Lol! WhoDat Nation get ready for a ride because the seeds yall front office is planting its not gon be a good look for yall. See the way my God is set up he gets the last say & can get u back better than the Compton Curse out I wanna give these muthaf**kas! #YesICurseAndPraiseGod #OnlyGodCanJudgeMe #IputHisChargeRPicsUpBecauseTheSaintsAintShitForWhatTheyDoin”