Kayla’s beau missed his TV gig due to an incident which resulted in loosing part of his pinky. The “Good morning America” host returned Wednesday to share that he had “a little accident.”

The Texas native born in 1971, became one of the league’s all-time QB sack leaders, over the course of his NFL career. After spending part of his childhood in Germany due to his father’s

He was a dominant defensive end at Texas Southern University, and had a record 41.5 sacks over his illustrious career.

Michael Strahan won the the NFL record for sacks in a season with 22.5 and won a Super Bowl during his final year in the NFL with the New York Giants. He retired in 2007. He is an inducted member of the Pro Football Hall of Fame.

Following retirement, like many others, he transitioned into a TV football analyst. But in 2012, Michael branched out to TV personality as he became Kelly Ripa’s co-host on ABC’s Live with Kelly and Michael. 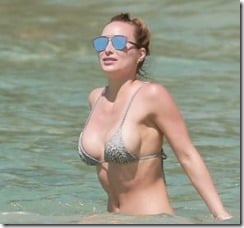 Strahan’s love life has been a little tumultuous. He is the father of four children from two different women.

He was formerly married to Wanda Hutchins but divorced her in 1996. He and Wanda share daughter Tanita and son, Michael Jr. He later had twins with his second wife Jean Muggli. He and Muggli separated in 2006.

Three years later, in 2009, he became engaged to Nicole Murphy, former wife of actor and comedian Eddie Murphy. However, the couple called it quits in 2014.

Two years after his split from Nicole Murphy, Strahan was seen in the company of the lovely Kayla Quick. 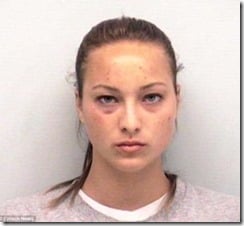 In May of 2016, the two were first reported to be dating. After spending quality time with Strahan over romantic dinners and vacations in St. Barts –she was quickly included in family reunions. She was seen attending the U.S. Open tennis tournament with his three daughters and his son.

It was later discovered the 28-year-old who has worked as a cocktail waitress in the past, presented a long list of run-ins with the law. The Florida native worked as a waitress at a Tampa strip club called Thee DollHouse.

Kayla Lynn Quick was born on October 17, 1988. She has a sister named, Kara Lee Quick and her father’s name is Gerald Alan Quick. According to Fabwags, both her sister and father have also been in trouble with the law.

The pretty blonde was allegedly arrested at age 14 for disorderly conduct after a brawl with another girl in her Florida hometown. In 2005, she was charged with burglary and grand theft — for stealing from a relative.

According to the Daily Mail, she stole from her sick grandmother.

According to her high school ex-boyfriend, Justin Hundley, Kayla Quick had been a good girl up until the point she was arrested at 14. He said she turned into a huge party girl after that. She graduated from college in 2011.