Mia Marshall is the proud girlfriend of NFL rookie player, Eric Smith -who is currently playing for the New York Giants.

Mia’s offensive tackle boyfriend made his NFL debut replacing Nate Solder after he left Sunday’s Giants-Jets game with a concussion.

Smith who hails from Decatur, Ga; attended Columbia High School in his hometown, where he was a three-star prospect. He committed to attend the University of Virginia in 2012.

He was signed by the Miami Dolphins as an undrafted free agent. While in Miami, he made the team’s 53-man roster as a backup right tackle however he was put on injury reserve. A couple of months later he was again roster active. In September of last year he was waived by the Dolphins.
Since the 6 ft 5 in; 315 lb offensive player has been on practice squad for both the England Patriots and the New York Jets.
He was claimed by the Jets off New England’s practice squad earlier this year. The Giants claimed Smith off waivers from the Jets on Sept. 1st. 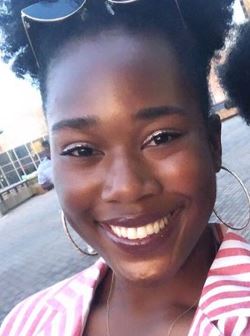 The 24-year-old has been in a relationship with lovely Mia Marshall for three years. The two celebrated their 3rd year anniversary with romantic posts to each other.
Mia Marshall wrote

The Lord took his time with you Eric. I am so blessed that he felt as if I was the one put on this earth to be your partner. I couldn’t imagine doing life with anybody else by my side. The past 3 years have been nothing short of amazing. We have grown so much, both together and as individuals. You have loved me at my highs and lows and loved me on days where I felt like I couldn’t even love myself. I thank you for that. I thank you for being the foundation of this relationship. I can’t wait to see what God has in store for us this year and the years to come. I love you so much Eric Maurice Smith. Happy 3rd Anniversary

Mia Andresa Marshall or Mia Marshall hails from Lilburn, Ga. She was born January 15, 1995 to parents Robert and Pamella Marshall. She has one brother, Miles, and a sister, Robin.

Pretty Mia Marshall majored in Chemistry at Appalachian State University -where she was also a student/athlete. Mia was a member of the Appalachian State Mountaineers women’s basketball team where she played Center/Forward position.
She previously attended Parkview High School where she was team captain and three-sport varsity letterman. At Parkview she was active in basketball, softball, track and field. Check out her full profile here.