Raina’s husband could become the next head coach for the New York Giants, reports say. Born Matt Patricia on Sept. 13, 1974; the Sherrill, N.Y. native was an offensive lineman in college at Rensselaer Polytechnic Institute, playing both center and guard.

He holds a bachelor’s degree in aeronautical engineering from R.P.I. and a master’s in education from the University of Massachusetts.

Patricia began as a grad assistant at R.P.I. in 1996, worked the next two years as an aeronautical engineer, then returned to coaching at Amherst College (defensive line, 1999-2000), before heading to Syracuse for three years as a grad assistant (2001-03) and then finally landing in New England.

He has worked for the Patriots since 2004 and has been part of three of this dynasty’s five Super Bowl championships. He was hired as an offensive assistant (2004), became assistant offensive line coach in 2005, took over linebackers for five years (2006-10), and worked one season of safeties (2011) before taking over as full-time defensive coordinator in 2012. 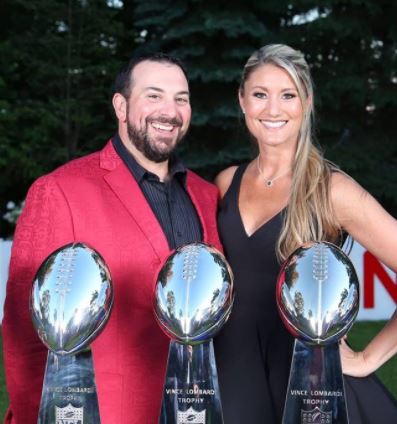 39-year-old Raina Patricia was born Raina Grigelevich. She graduated in 1996 from Cumberland High School and went onto attend Bryant College from 1996-2000.

Matt and Raina Patricia have been married since 2009. The stunning blonde is the mother of the couple’s three children, sons, Dominic and Dave, and a daughter, Giamina. The family of five resides in Foxboro, Massachusetts.

As the wife of a coach, Raina has been involved in charity work and is a member of the Patriots Women’s Association.