Silvana Breida is the stunning wife of Matt Breida, the talented running back for the San Francisco 49ers.

Silvana’s husband will be appearing with the 49ers this Sunday at Super Bowl LIV.
Born February 28, 1995; the Florida native as adopted by his parents Terri and Mike. Matt He played football for the Sharks at Nature Coast Technical High School in Brooksville, Florida. 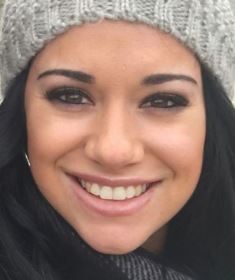 He then attended Georgia Southern University where in his sophomore year rushed for 1,485 yards which was tops in the Sun Belt Conference. He signed with the San Francisco 49ers as an undrafted free agent in 2017. During his first career start against the Detroit Lions in 2018, he led the NFL with 138 rushing yards.
At 24, Matt is already a married fella, he and Silvana Breida tied the knot in 2018.

Silvana Breida met her man while attending Nature Coast Technical High School, in fact they were members of their high school’s 2011 varsity squad. Matt finished the season as the school’s lead scorer. Silvana was number two.
Mrs. Berida who was born Silvana Paonessa served as her teams kicker and went onto become the first female football player in Hernando County history in 2011. At the time, she debuted in a 42-0 win for the Sharks, hitting on all six of her extra-point attempts. In addition to football, Silvana was also into soccer.

Silvana Maria Paonessa was born on February 2, 1994; her parents are Angela and Frank Paonessa and has two siblings, Dominic and sister Santina.
She and Matt said I Do, in April 2018 at The Don Cesar Hotel in St. Pete, Florida.

Despite being an NFL wag, Silvana Breida stays out of the spotlight and enojys a low profile. The lovely dark haired lady isn’t into social media either.