You are here: Home / NFL / Who is Mason Rudolph’s Girlfriend?

Mason was accused of calling Cleveland Browns defensive end Myles Garrett -a racial slur which ended with the two getting into an ugly fight. The brawl took place in the final seconds of the Pittsburgh Steelers-Cleveland Browns game on Thursday night.
As a result, Garrett ended up being suspended indefinitely by the NFL after tearing off Rudolph’s helmet and swinging at him.

Mason has since vehemently denied the report of being accused of using a racial slur. 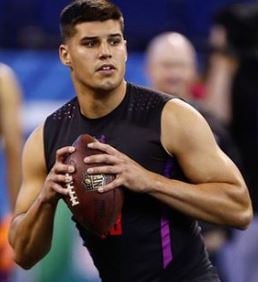 Mason attended Westminster Catawba Christian School and later transferred to Northwestern High School in Rock Hill, South Carolina.
He played college football for Oklahoma State University. In 2017 he was the recipient of both the Johnny Unitas Golden Arm Award and the Sammy Baugh trophy. He was a standout at Oklahoma State before joining the NFL.
Rudolph studied NFL quarterbacks Matt Ryan and Tom Brady last offseason to try and pick up tips for himself and the Oklahoma State offense.

He ended his OSU career with a legacy of toughness. He threw three scores against West Virginia after he didn’t practice all week with an apparent shoulder injury.
He was selected by the Pittsburgh Steelers in the third round of the 2018 NFL Draft.

The 6 ft 5 in; 235 lb quarterback seems to be close to his family members, and judging from his social media it looks like the 24-year-old seems to be currently single. The only woman in his life right now appears to be his lovely mom who is often featured on his Instagram.