Morgan Snow is the loving and supportive wife of NFL player, Marquise Goodwin -whom you may know best as a player with the San Francisco 49ers.

Morgan’s wide receiver hubby will be appearing this weekend at Super Bowl LIV.
Born November 19, 1990; the Lubbock, TX. native caught 132 passes for 1,709 yards and 17 touchdowns during his career at Rowlett High School.
At the University of Texas, he won two NCAA championships in the long jump (2010, 2012) and was a four-time All-American track and field athlete. On the football field, he was named the Alamo Bowl Offensive MVP in 2012. He also represented the U.S. in the long jump event at the 2012 Olympics.

Follwing a standout track and football career at the University of Texas; he was the third round pick of the Buffalo Bills in 2013. He played with the Bill until 2016 and was signed to the 49ers in 2017. That same year, he tied the knot to wife, Morgan. 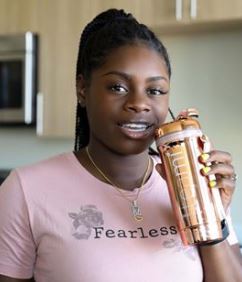 Morgan Snow met her man while attending the University of Texas -where she was a track star, becoming a 9-time All-American at the University of Texas at Austin. As a hurdler, she won gold medals in the 100 meter hurdles and 4×100 meter relay at the 2012 World Junior Championships in Athletics. She later won the Big 12 Indoor championship in the 60 meter hurdles in 2015.

Morgan graduated with a Bachelors of Science in Public Relations and also holds a Masters of Arts in Strategic Communications from Liberty University. She has her own website, where she shares her experience with losing a child.

Unfortunately for the couple, Morgan lost her first baby due to premature childbirth in 2017. They had planned to name the baby Marquise Jr. Morgan was nearly halfway through that pregnancy when the baby was delivered stillborn. At the time, Goodwin-Snow encouraged her husband to play against the New York Giants later that day.
They again suffered a terrible loss in June of 2019, when Morgan announced she lost twin boys.

The NFL wag describes herself on social media as a ‘ wifey, actress • pro-athlete • Texas alum and mother of three angels’