You are here: Home / NFL / Who is Marion Barber’s Wife/ Girlfriend?

Marion Barber is known as a retired NFL player who spent most of his playing career with the Dallas Cowboys.

Marion last played in the NFL in 2011 and announced his retirement in 2012. The 36-year-old is now grabbing headlines after being arrested on criminal mischief charges for a 2018 incident.

Born Marion Sylvester Barber III on June 10, 1983; the Plymouth, Minnesota native followed his father’s footsteps in playing college football at the University of Minnesota. His father played for the NY Jets. And his younger brother, Dominique Barber played safety for the Houston Texas. He has another brother, Thomas Barber who also played football for the f Minnesota Golden Gophers. 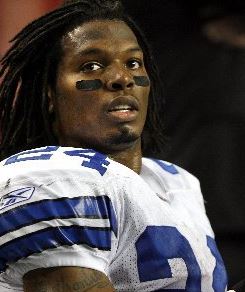 Prior to his college career, Marion Barber had previously been a standout in football, baseball and track at Wayzata High School.
Barber was drafted by the Dallas Cowboys in the fourth round of the 2005 NFL Draft. He was selected to the Pro Bowl in 2007 during his six-year tenure with the Cowboys. He played for the Cowboys from 2005 until 2010. He then played for the Chicago Bears in 2011 -which was his last season.

Barber was taken into custody after a records check revealed that he had two outstanding warrants in Denton County. He was driving at the time and officers stopped him for an “equipment violation”
Marion is said to have damaged two cars intentionally on July of 2018. He faces up to a year in jail.

Back in 2014, the former running back was taken to a hospital for a mental evaluation after cops were called to his home.
Is not yet clear if Marion is currently single or in a relationship or if he ever got married. He appears to be active on social media but his Instagram is set to private. He used to be in a relationship with Mercedes Nelson who back in 2010 was listed as part of the cast for VH1′s reality show “Football Wives”