Marcia Wilks is the loving and supportive wife of NFL coach, Steve Wilks –who until recently served as head coach for the Arizona Cardinals.

Marcia’s husband was relieved of his coaching duties by the Cardinals after only one season with the team.

Wilks becomes the first Cardinals coach let go after one season since Joe Kuharich was relieved of his duties following a 4-8 season in 1952. Born August 8, 1969; he attended West Charlotte (NC) High School and went on to play defensive back at Appalachian State (1987-91.

He then played defensive back and wide receiver for the Charlotte Rage of the Arena Football League in 1993. He earned a bachelor’s degree in Communications from Appalachian State.

Steve Wilks was named Arizona’s head coach earlier this year. The 49-year old came to Arizona after spending the past six seasons (2012-17) with Carolina, including last year as the Panthers defensive coordinator. 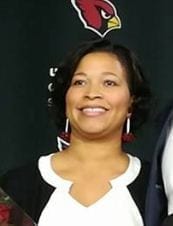 He’s been married to wife Marcia Rochelle Wilks for many years. Marcia Wilks who also goes by Marcie –and her hubby celebrated their 18th wedding anniversary in June of 2018.

She is the mother of the couple’s three children, two daughters and a son; 17-year-old Marissa, 10-year-old Melanni and son, 7-year-old Steven James.

The coach’s wife and mother of three has been a great source of support for Steve. He has stated in the past that, if he needs to talk about something –he goes to his wife.

Marcia and Steve Wilks met while he was a head coach at Savannah State. Since then, she’s become a master at moving. After her husband left for a new job, Marcia would stay back to finish working, when she still worked, and then for the kids to finish school. Then she’d pack the house and move the family herself.

Marcia and her family currently reside in Chandler, Arizona.