You are here: Home / NFL / Who is Malik McDowell’s Girlfriend?

Malik McDowell the 23-year-old Detroit Michigan and NFL free agent seems to be a single man.

There’s no word on an official girlfriend for Malik McDowell, however, if there is a special someone in his life she must be very worried about the future of the former Seattle Seahawks player.
Reports say McDowell was arrested after a truck that was allegedly stolen was found on his property. According to authorities two F-150 pick-up trucks were snatched from a Ford Motor dealership. When investigators tracked one of the vehicle’s GPS systems, it was found to be at McDowell’s home. He was arrested for felony receiving and concealing stolen property.

And that’s not all, a video has been released of Malik’s February scuffle with police.
Back in February, McDowell had a physical confrontation with Michigan officers after he was pulled over. In video footage captured by the officer’s dashcam, McDowell pulled over in front of a gas station market and got out of his Jeep. The former Michigan State standout is seen tussling with police officers after they stopped him on suspicion of drunken driving in February and tried to arrest him. 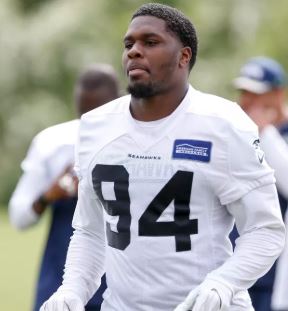 The officer repeatedly tells him to get back into his car and after a few moments, he does. The two speak, but it consists of McDowell demanding to speak to a supervisor. The officer tells him just to show his license and registration, and eventually tries to use the taser but fails. The two fight inside of the store before McDowell is subdued and a backup officer arrives on the scene.
McDowell is charged with assault/resisting arrest, a felony punishable by up to two years in prison and fines, and operating while intoxicated.

Believe it or not, that’s not all; the former defensive lineman is also being sued by the Seahawks. The team claims he failed to pay back $799,238 as ordered by an arbitrator after McDowell suffered a head injury in an ATV accident in July 2017. The injury kept him from playing a single snap in the NFL.

Born June 20, 1996; McDowell came to Michigan State from Southfield High as a heralded five-star recruit who was ranked the No. 26 player in the nation by Rivals.com. He was named first-team All-Big Ten by the Associated Press and earned second-team honors from the league’s coaches and media for his third and final season with the Spartans in 2016. He was drafted in the second round in 2017 by the Seahawks.