Makayla Hekker is the gorgeous wife of NFL player Johnny Hekker –currently a punter for the Los Angeles Rams.

Off the field, the 28-year-old is a happily married man and father of one. He and his gorgeous wife have been married for a few years now and let’s just say she is a worthy wag.

Makayla Hekker was born Makayla Stambaugh, she is a retired gymnast and current full time Wag and mommy. Makalya, like her man, attended OSU –where she was a member of the women’s gymnastics. Makayla had a stellar college career winning 54 career individual titles, which ranks fourth in school history. She was a four-time All-American after garnering first-team honors on the floor twice and bars once, and second-team honors on the floor in 2012. 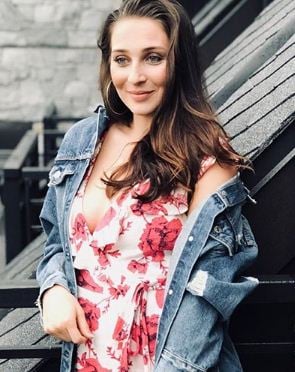 The California native was a six-time Junior Olympic national champion. In 2008, she won national titles on the beam, floor, and all-around. She trained at Byers Gymnastics Center.

She graduated from Oregon State in 2013 with a major in human development and family science.

In addition to being a Wag, the former gymnast has turned to coaching. According to a profile, she is in her first season as a graduate assistant coach for the Lindenwood women’s gymnastics team.

As previously mentioned, Makayla is also the mom of an adorable little guy. The couple who has been married since 2015, welcomed their first child in early 2018.