Madison Oberg is the stunning wife of NFL player, Carson Wentz –currently a quarterback for the Philadelphia Eagles.

Madison’s NFL star is a Bismarck native born December 30th, 1992. He began his career as both a quarterback and defensive back for Bismarck Century High School. He went on to play college football at North Dakota State University.

Madison’s beau has received many accolades; he was named NCAA Division I Championship Game Most Outstanding Player in 2015 and 2016.

Wentz was picked by the Philadelphia Eagles with the 2nd-overall pick in the 2016 NFL Draft. Since then he’s made a name for himself as a franchise and all-time rookie standard with 3 79 completions in his debut season.

He also set Eagles rookie records in pass attempts (607), passing yards (3,782), completion percentage (62.4%), passing TDs (16) and passer rating (79.3) –according to his official Eagles bio. Wentz helped the Eagles earn the top seed in the 2017-18 NFC Playoffs, which led to the team capturing its first ever Super Bowl title in Super Bowl LII. 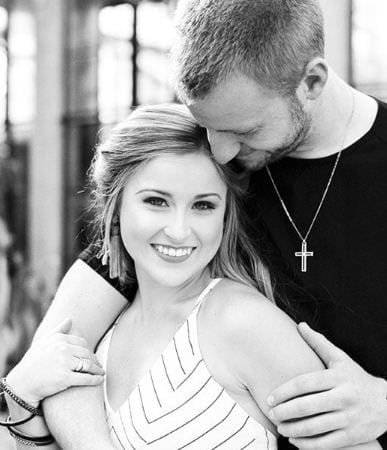 The lovely Madison Oberg became officially Mrs. Wentz earlier this year. The couple began dating in 2017, became engaged in February 2018 following his Super Bowl win and tied the knot this past July, just five months after their engagement. I guess when you know, you know!

Madison or Maddie, is the daughter of Brian Oberg and Lisa Broughton. The gorgeous 21-year-old has two sisters.

According to Fabwags, she attended Missouri Southern State University where she studied elementary education.

The two began dating sometime in 2017 and bonded through a Mission trip they did in May of that year. At the time, Madison Oberg was an intern at Mission of Hope: Haiti.

It appears, Madison is not much into social media, but you can check out more photos of her on Carson’s Instagram here.