Mackenzie Andrews is the lovely wife of NFL player, David Andrews –currently a center for the Patriots.

Mackenzie’s hubby who is in his fourth year with the team is a Georgia native who was born July 10, 1992 –is safe to say he’ll be exited for the Super Bowl LIII which will be in Atlanta.

While attending Wesleyan High School, he was ranked the No. 9 center nationally and No. 37 prospect overall. He played college football at the University of Georgia –where he started every game for the Bulldogs over his final three seasons.

David –the nephew of long-time NFL head coach and player Dan Reeves –was voted team MVP as well as Associated Press Second Team All-SEC as a senior in 2014. Was also voted the team’s permanent captain and won the squad’s toughest player award. He ultimately appeared in 50 games with 40 starts over his four-year career.

Andrews was signed by the New England Patriots as a rookie free agent back in May 2015. He played in his first Super Bowl in 2017. 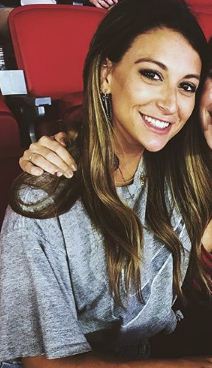 Off the field, he is happily married fella and daddy of one, meet his lovely wife, Mackenzie Andrews.

Born Mackenzie Dempsey, she graduated from Cedartown High School and is a former cheerleader. She was picked to cheer at football, volleyball and basketball games, and gymnastic events –during high school and all through college.

She met David during their time at the University of Georgia, where the then Mackenzie Dempsey was a cheerleader and from where she obtained her Bachelor of Science in Health Promotion.

The two were first friends and began dating during their junior year.

He proposed to Dempsey in the middle of Sanford Stadium, the home of the Georgia Bulldogs. The couple tied the knot during the 2017 offseason.

David and Mackenzie Andrews have postponed having children and for now are proud dog parents to Cairo and Kimber.