Lilly Williams is the lovely wife of NFL player, Damien Williams -currently a running back whit the Kansas City Chiefs.

In 2014, he was signed by the Miami Dolphins as an undrafted college free agent. He stayed with the Dolphins from 2014 until 2017; making his NFL debut with the team that same year vs. New England. He made his first playoff appearance with Miami in the AFC Wild Card game at Pittsburgh in 2017.
Williams signed with the Kansas City Chiefs in 2018 and entered his second season with the Chiefs in 2019.
The Chiefs running back had a breakout season in Kansas City this year. The 27-year-old set career marks in his sixth in the NFL.
Williams carried 17 times for 45 yards and a touchdown in Sunday’s AFC Championship Game against the Titans. He also caught five passes for an additional 44 yards in the 35-24 win. 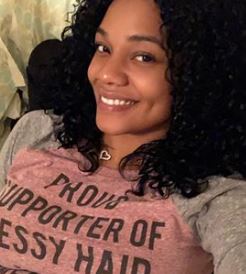 Damien has been married to gorgeous wife Lilly Williams for a few years. Lilly and Damien met while he played with the Dolphins and started dating in 2015. Is not clear exactly when the couple tied the knot, however her status on social media says she’s married.

Lilly Belle Williams was born on July 7, 1987, in Florida. Is not clear if Lilly Williams -who enjoys her privacy, has a job or an specific profession of her own; however is safe to say the curly haired beauty keeps busy with her babies.

She and her NFL stud have a couple of small children together, including adorable daughter -Dilly. She gave birth to the couple’s first child, son Damien Jr. -in 2017.

Check out the proud WAG and mom on Instagram here.