Stephanie Toilolo is the gorgeous wife of NFL player, Levine Toilolo -whom you known best as a player for the San Francisco 49ers.

Stephanie’s NFL hubby attended Helix High School in La Mesa, California where he played football for the Helix Highlanders. He later played college football at Stanford and was an honorable mention at the All- Pac-12 Conference in 2012.

The San Diego native was selected in the fourth round of the 2013 NFL Draft by the Atlanta Falcons. He started in Super Bowl LI as the Falcons were defeated by the New England Patriots in 2017.
In 2018 he was released by the Falcons and signed with the Detroit Lions. He signed with the 49ers in May of 2019.
At 28, Toilolo is already a married fella; he tied the knot with longtime girlfriend Stephanie two years ago.
Levine popped the question in July 2016 while celebrating his birthday in Westside’s Bacchanalia. The couple tied the knot on March 11, 2017 in Atlanta, Georgia. 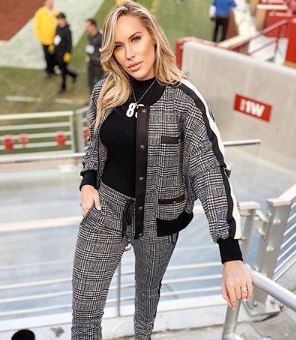 Stephanie Toilolo was born Stephanie Ming, the blonde stunner isn’t only a pretty face, this NFL wag is also a business woman who is also proud of her relationship with God. She writes on her social media bio ‘wild for Jesus’

Stephanie Toilolo is the founder and creator of fashion brand, Good Sport Apparel. According to its website, Stephanie is passionate about her faith and the fashion world. Stepahnie came up with the whole concept for her brand after waking up one night and feeling like God was putting something special in her heart -tying in also her husband.

She states on the website ‘The name for the brand, GOOD SPORT,
has a special significance GOOD SPORT (noun): Someone who exhibits polite behavior even or especially when they lose, walking with humility and kindness, on and off the field’