You are here: Home / NFL / Who is LB Brandon Marshall’s Girlfriend?

Brandon Marshall, the NFL player whom you know as a Linebacker for the Raiders is no more.

Reports say the 29-year-old was cut by the Oakland Raiders just five months after signing him to a one-year deal.

This just means the veteran player will catch on with another team, if he is in good health that is.

Born Brandon Markieth Marshall on Sept 10, 1989; the Las Vegas native played linebacker, running back and tight end, earning first-team All-Sunset Conference honors during his career at Cimarron-Memorial High School in Las Vegas. He was named second-team All-State as a linebacker and finished his career with 68 tackles, 13 tsacks, 57 quarterback pressures, four fumble recoveries and scored 10 touchdowns as a running back. 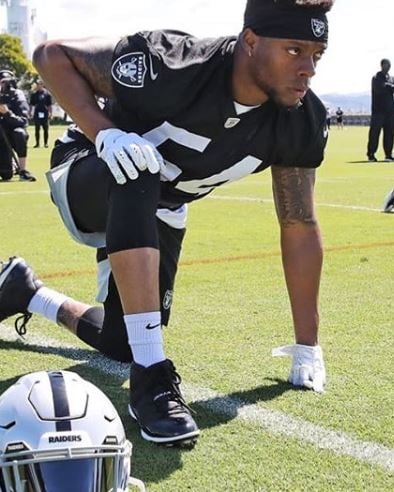 Marshall was a four-year starter at Nevada, where he totaled 259 tackles (145 solo), 40 tackles for a loss, six sacks, three interceptions, seven fumble recoveries and three forced fumbles. He made 102 tackles with 10 tackles for a loss as a senior. He earned second-team All-WAC honors from Phil Steele Publications.

He was selected by the Jacksonville Jaguars in the fifth round of the 2012 NFL Draft. He joined the Broncos as a practice-squad signee on Sept. 2, 2013.
Marshall helped the Broncos win Super Bowl 50 and recorded 100 tackles in three of four seasons between 2014-17. He was limited to just 11 games and seven starts by a knee injury in 2018, and the team declined the option on his contract after the season.

Brandon who keeps active on social media, often posts about his lifestyle, family and friends -however he is not the type to reveal about his current lady. He’s kept very quiet about his romantic life and is not clear if he is currently on or off the market but judging from his social media, he appears to be single -which is rare for NFL players.